Tea bushes are thriving, though, in the oak forest that Fred Smetacek allowed to grow on the terraces. He called it an Urwald – primeval forest – which grew, self-seeded, by simply leaving that land severely alone. No one was allowed to cut grass or even collect dead wood there. This was long before conservation, regeneration, environment and the rest came to most people’s attention. The tea bushes are happily unkempt and wild, flowering and fruiting every year, producing lots of the coveted two-leaves-and-a-bud tips every spring.

My children used to troop down to the Walnut Grove (a copse of walnut trees that had existed there from long ago) and pick tea leaves. They would bring them home, process them by hand the way Rekha, their ayah (nanny), had taught them, and make themselves cups of tea they drank with great enjoyment. Rekha was from the village in the valley within the estate. Her grandfather had been gifted land by Fred, as had the rest of the village, in the ’50s. They had tea bushes fringing the terraces where they grew wheat and maize, plums, peaches and pears. The bushes supplied them their year’s ration of tea, with enough left over to bring up a little bag to the bunglah as a present for the family – for which they received a cash gift back, of course. The tea the children made was pretty good – it is a pity they do not go to harvest it anymore. The occasional guest does, and we show them the local way to process it. 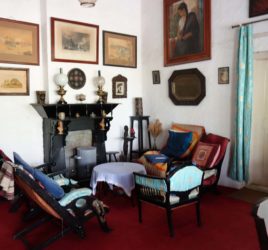